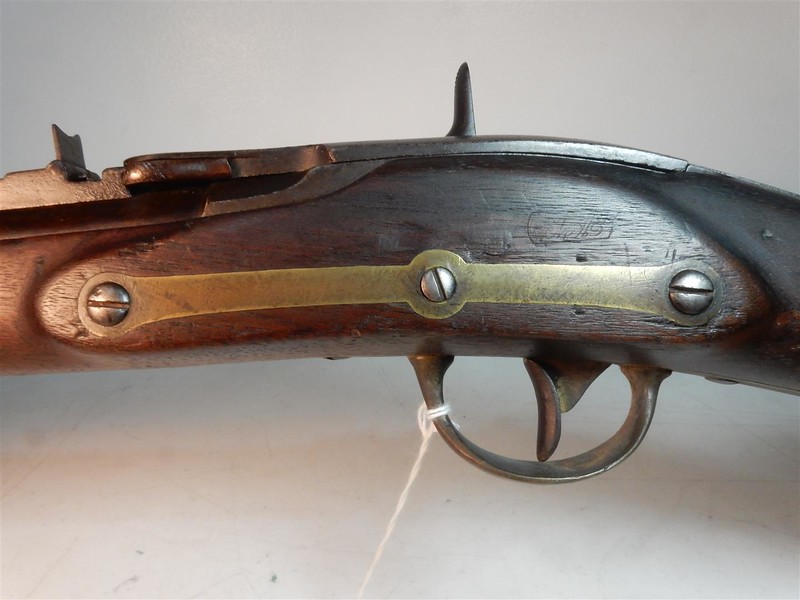 The photo below is of the mystery 4792 rifle cartouche - like no other cartouches in book U.S. Military Arms Inspector Marks authored by Tony Daum and Charles Pate. Inspector information and cartouche drawings below are via consent and courtesy of Charles Pate, with content credit to both Charles and Tony Daum (passed in 2013). Examples are from my collection of photos.

I forgot to add that all the rifles on my site have Zadock Butt's cartouche - with the exception of this 4792 rifle, which has no sling bar as part of the trigger guard???  This makes no sense to me. The very first Merrill firearm with a cartouche is William Moore's 1208 (WHR), then the Buffalo Bill Center of the West Museum's 1601 (GGS), then nothing at all until the 4000's.

I'm trying to contact Phillip E. Fuller for his consent to share content from his articles in The Gun Report, July and August 2001, titled The Treatise on Merrill Military Firearms - Part I (and II).  Between his analysis and mine we should be able to nail the dates of serial manufactured Merrills. 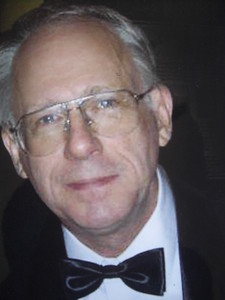 Samuel was long-serving employee of the Springfield Armory. Born 11/2/1830 in Belchertown, MA. Started inspecting 3/12/1862 on Colt-altered Model 1841 rifles. June 1863 he went to Baltimore to inspect Merrill carbines and escaped the destruction for the Phoenix Armory that occurred during the draft riots in July.  Need to find the serial range where Samuel might have inspected and stamped Merrills. Spent all of 1864 at the Starr Armory in Yonkers, NY. Died 12/16/1915 in Springfield, MA.

Maybe the "B" stamped on several Merrill parts were made by Bugbee?

Born 1809 in Hesse-Darmstadt, Germany.  He was a machinist and toolmaker who worked at Harpers Ferry Armory for over 25 years.  He later served in the Confederate Government as master armorer of one of the most important armories.

Burkhart inspected the Merrill-converted 100 1841 Mississippi's, 100 1842 Springfields, 100 1847 Musketoons between July and August 1860.  Chief of Ordnance letters indicated that the inspection was not completed until approximately September 14th.  In June of 1861, James H. Burton asked Burkhart to superintend the packing and shipping of the machinery that had survived destruction.  Burkhart joined Burton in Richmond after that work was done.  Later, the Confederate Ordnance Department decided to transfer the salvaged rifle-making equipment to North Carolina.  Burkhart was appointed master armorer at the Fayetteville Armory.  Died August 17th, 1890 in Baltimore.

EXAMPLES:  I could not find any examples from the photos I have for the Mississippi, Harpers Ferry and Musketoon rifles.  Bummer.

Zadock inspected many first and second model Merrill carbines and rifles. He was a civilian employee of the Ordnance Department with a long career at the Harpers Ferry Armory. Born 4/12/1804 in Maryland. Started working at Harpers Ferry May 1821 as an armorer's assistant. Later he became a master armorer and worked as an inspector until dismissed July 1849 for troublemaking and insurrection. He was a Union man where majority were sentimental to the Confederacy. He signed the oath of a sub-inspector of contract arms 10/2/1862. Spent December 1863 and January 1864 in Baltimore inspecting Merrill carbines and rifles. Treasury Department records for 1864 contain certificates signed by Zadock Butt for the following: 700 Merrill carbines on January 6th, "Merrill cartridges and parts" on February 5th, 500,000 Merrill cartridges on March 26th, and an unspecified quantity of Merrill cartridges on June 3rd. Butt's service as an inspector may have ended before the Civil War was over. Died in Bolivar on May 30, 1877.

Born in Boston, MA October 1837. He signed the inspector's oath at Hartford, CT on 12/26/1862. Died sometime between 1920 and 1922. Inspected second model Merrill carbines. One specimen was recorded at the upper end of the serial number range with Duston's cartouche on the counterpane in the sub-inspector's position and Robert K. Whiteley as the final inspector. A.C. Daum did not address the mark in his draft, but he included a block-letter mark of J.S.D that he had noted on the barrel and stock comb of an 1864-dated second model Merrill carbine, perhaps the same carbine bearing Duston's script cartouche.

Born in Philadelphia, PA in 1829. Primarily involved in edged weapon inspections. {might have been responsible for so many Merrills with "H" stamped on metal parts?} Hannis was at the Ames Armory inspecting sabers in early June 1862 but was to go to inspect Merrill carbines later that month. No other reference in his bio regarding Merrills.

Born in Suffield, CTon 11/3/1808. Treasury and Army Chief of Ordnance records show he served as sub-inspector at Whitney in 1854 adn 1855. Merrill (at Remington) in 1855... Correspondence uncovered in the National Archives by Paul Johnson indicates that King inspected "Merrill carbines" in December of 1855 in Ilion (Remington), New York. Based upon the timing, this can only refer to the Merrill, Latrobe and Thomas carbines, which proved to be unserviceable. Died in Clinton, CT on 11/11/1887.

Born in Virginia 1818. Some point after the demise of the Harpers Ferry Armory in April 1861, Laley became the master armorer at the Allegheny Arsenal in the Lawrenceville section of Pittsburgh. He never worked at the Springfield Armory, nor is he recorded as having signed the sub-inspectors' oath that was introduced in September of 1862, but based upon the surviving weapons that bear his marks, he resumed working as an inspector in 1863. In October of 1864 while working at the St. Louis Arsenal, charges were brought against him for malfeasance or possibly (since he was a Virginian) for disloyalty. In late November, the Secretary of the Army ordered that laley be dismissed. He later moved to Baltimore, MD. Died Needmore, PA in 1900.

10/15/64: Thomas K. Laley had worked for the Inspection Service under WAT (Thornton) and then went to work for Babbitt in Louisville but charges were brought against him (for making disloyal statements) by PM J. L. McPhail. Per McPhail, Laley had said he would “take up arms against the U.S.” He said a person named John W. Price of the rebel army left Frederick MD after the last raid taking with him $6000 stolen from the citizens and was a relative of Laley. The AG referred McPhail’s letter to the OO and the COO referred it to Thornton to investigate. Thornton said Laley had been in his employ in September 1864 and left to work for Babbitt. Laley had been in Baltimore working on Merrill carbines in July-September.

11/7/64: This is a package on Laley forwarded by Lt. Babbitt. [The WD endorsement directed Laley be dismissed.] Lt Babbitt wrote that IAW Dyer’s instructions he had investigated the habits and associations of Mr. Laley and had found “nothing reprehensible in either.” Babbitt had first met Laley when the latter was the principal foreman of shops at Allegheny Arsenal in the winter of 1861 – capable, devoted, energetic, etc. Met him again on Babbitt’s return to the arsenal in 1863. In the fall of 1863 he and others were charged with disloyal sentiments. He at that time convinced Babbitt that his remarks had been misinterpreted/misrepresented. He resigned due to being “harassed to death” and to relieve Col. Whiteley of the pressure on him. He left the area but heard that in his absence others talked more about him so he returned to confront them, where upon he was arrested by the Provost Marshal (Capt. J. Heron Foster) but was released after the captain investigated the matter and Laley left Pittsburg. Babbitt learned he was looking for work and needed hands in 9/1863 so he hired him as superintendent of the Louisville Depot. When questions again arose he asked Laley about them and Laley said he had been shown a Spencer rifle in Baltimore (in 1863) that had been captured from rebels and noted that it had no markings but was clearly better than the rebels could have made and he suspected that it had been made by the Spencer Rifle Company and that the Secretary of War should be informed about it. He stated he would appear before any official body to defend himself and gave as references several of the sub-inspectors (Ainsworth, etc.) as well as Capt. Foster. Babbitt concluded by supporting Laley. Charles Dana in the War Department referred the matter to PM McPhail in Baltimore asking if he had any evidence against Laley and McPhail returned a statement made by John P. Murray and his wife regarding the alleged disloyal statements made by Laley (McPhail vouched for the Murrays). Based on the Murray’s statement, Dana ordered Laley’s dismissal.

Born in CT about 1830. No evidence that he ever worked at the Springfield Armory, so stated he was hired directly into the inspection service. He signed the sub-inspectors' oath at Hartford, CT on November 1862. Inspected second model Merrill carbines. Russell's cartouche was observed in front of Robert K. Whiteley's final inspection mark. Died in Waterbury, CT sometime in 1886.

EXAMPLES:  1208 William Moore collection - earliest cartouche on any Merrill I've seen, so could this be the start of the Ordnance Department contract with Merrill?; 4423 - could be fake - multiple stamps, not seen on any other; 13647 - 1st cartouche (book has WHR before RKW's final inspection mark)

Born 3/22/1821 in Ludlow, VT Began working at the Springfield Armory in late 1842. Signed the sub-inspectors’ oath at Philadelphia, PA on 10/2/1862. The 1863 Springfield city directory has Saunders as leaving the inspection service and returned in 1864. On June 21st, 1862, he was sent to Baltimore to inspect Merrill carbines. He was still there two months later. Might have been there longer, but where are all the inspection cartouches or part stamps? Died 6/22/1874 in Springfield, MA.

EXAMPLE:  1601 from Buffalo Bill Center of the West.

Born 1/12/1824 in Boston, MA. Began working at the Springfield Armory between 1854 and 1857. Ordnance and Treasury Department records indicate Shattuck... Major Hagner's payrolls list him as being in Hartford from October 1862 to March 1863, at which point he was sent to Baltimore (Merrill). He was back at Colt's in April 1863. Several first model Merrills have been noted with GDS #1 on the counterpane.

Born 1817 in Windsor, CT. Started work at the Springfield Armory in 1844. Correspondence found by Paul Johnson in the National Archives: Merrill carbines. November 1855. Based on the date would have to be the Merrill, Latrobe & Thomas carbines, a small quantity of which were purchased by the Ordnance Department in 1855. Since, however, all the carbines were ultimately rejected by the Ordnance Department, it is unlikely that he marked them. Died 3/21/1876 in Springfield, MA.

Born 1835 in Virginia. Worked as a sub-inspector as early as February 1862. Inspected Burnsides in Providence from December 1862 to February 1863, in Baltimore March and April 1863, in Norwich CT May thru October 1863. Author has seen several examples with Whiteley's cartouche #1 in the rear-most position (behind "JSD" or "WHR", presumably indicating that he was the principal sub-inspector. Back in Baltimore July 1864 - July 28 (1,200 Merrills - final Ordnance Department purchase).  Died 4/17/1922 in Brainerd, MN.